Even though Hillary Clinton didn’t make it to become the president of the USA, she was definitely one of the first ladies who started bringing the pantsuit back to “life” during her campaign back in 2016. However, the real comeback of the pantsuit and the diverse ways on how to wear it are expected in the F/W17 season. The selection is huge and rich in variety, including everything from bold patterns to more conventional ones from the past decades. To celebrate this comeback, we decided to team up with our blogger friends from the “One Trend – Different Styles” series to offer you as many diferent ways on how to wear this trend as possible. To find out more about this trend, simply click on the direct links (pictures) at the end of this article.

Even though there are trend reports in every season, we always celebrate the F/W trends the most. Not only because of the variety of the patterns and designs, but also because of the versatile interpretations by the different designers who all strive to get as much attention for their collections as possible. Probably many of them, but especially designers like Stella McCartney and Victoria Beckham were inspired by the pantsuit legend Hillary Clinton. However, this iconic two-piece look has been reimagined into a fresh and covetable trend of the season. We like!

The times when wearing a suit only to a “traditional” work are a thing of the past. Finally! This season, women around the world took the former business suiting to a new level with bright colors, unconventional prints and creative clothing mixing. Wearing a black pantsuit with a white blouse? Boring! Pantsuit looks are everything but not conservative and stuffy this fall. If you wanna look really badass, then grab some of the eye-catching suits and mix it with some cool accents.

Pantsuits usually come as classics in grey or black, but since I really love to try out some new stuff and I don’t want to confine myself to usual neutral classics (not this time), I decided to wear a colored blazer and matching pants. And that in no other color than in the color of Fall 2017 – powerful red!

How to style colored pantsuits?

Well, my styling tipp is to keep it cool with a simple statement shirt and complete it with sock boots when the pants are longer. Or some loafers when the pants come shorter. To inject a little fun, add some cool accessorize. Colored pantsuits are already expressive in appearance, however, they shouldn´t be overdone with other items of clothing.

To be honest, I never really thought of myself as a person who could or ever would wear pantsuits. Even though I do have lots of suit trousers and blazers in my closet, I always wore them separately. To match these two and wear this famous oldie wasn’t my piece of cake at all. However, as I’m known for my versatile clothing style among my friends, I’ve decided to give a pantsuit a chance. I quite liked the way it looked on me first time I tried it, but I simply had to style it in a more casual way to minimize the ladylike appearance.

How to style the classical pantsuit?

In contrast to Kaja’s combo, which unites two of the major trends of the season and reflects the real girlboss-look, I’ve picked a more classical approach to the pantsuit comeback. I quite like the vintage appearance of the patterns, but I’ve styled it in a rather sporty way to feel comfortable wearing it. Combining the pantsuit with a tight white shirt would’ve been anything, but my style. Thats of course the reason I’ve chosen the black hoodie which makes the look appear bossy, yet quite unladylike. I’m not trying to create an impression of being no-lady-at-all, but when it comes to fashion, I enjoy adding some twists into my looks to avoid looking monotonous. 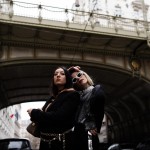