After I told you all about Puerto Vallarta last week, it´s finally time to share some moments from the most beautiful spot in Mexico – Isla Holbox. Trendsetters are now heading for this hippy-chic island, 40 miles north-west of Cancun. A 20-minute ferry ride from the port of Chiquila (or a flight from Playa del Carmen or Cancun), the 26-mile long isle, where fishing is the primary industry, is a world away from high-rise hotels and package tours. This is a place where I wish I could have stayes forever. A place where time doesn’t play any role in the daily life and a place to enjoy the best Mexican cuisine.

Isla Holbox lays at the tip of the Yucatán peninsula (but still in the state of Quintana Roo), where the Gulf of Mexico meets the Caribbean. The island is surrounded by azure waters, and the shallow lagoon separating it from the mainland attracts loads of migrating flamingos. A network of sandy streets connects the port, the coast and the colourful town square. There is only one ATM and no cars – yellow golf buggies taxi people around the island for about 30 pesos. I read a lot about the island before our trip, but nothing could have prepared my eyes for the beauty and tranquillity that awaited us on this small, secluded island. Although it is only a couple of hours northwest of Cancun, it feels worlds apart as the culture, size, authenticity, and atmosphere uniquely separate it from other “touristy” parts of Mexico. I wish we could have added a few extra days, but it wasn’t possible on this trip. We are going back though!

WHERE TO STAY ON ISLA HOLBOX

Finding an accommodation on Isla Holbox can be quite challenging due to the fact that only one side of the island is inhabited. You will not be able find any large resorts and development has been limited to luxury boutique hotels, budget hotels and hostels, smaller restaurants and cafes, and the occasional tiendas (shops) and mercados (markets). We were lucky enough to have been able to stay in the most beautiful hotel on the whole island – Casa las Tortugas. It took a train ride, two flights, bus ride, boat, and golf cart to get to Casa Las Tortugas, but it was definitely worth it. Stress and tension from traveling quickly melted away as soon as we had reached Casa las Tortugas.

We stayed in two different rooms – Limon and Aqua and fell in love with both of them. The ocean front bungalow (Aqua) and the huge room at the top of the hotel (Limon) were both amazing. Casa las Tortugas is not a typical hotel, because each room has its own style, vibe and also a name. And all the rooms are individually arranged and look differently. We had breakfast included in our stay and the view from the restaurant Mandarina was priceless. We mainly had fruits with yogurt and granola, simply because we are granola-fans, but they also offer different dishes every day.

Casa las Tortugas has its own eco-spa and yoga studio, where you can enjoy loads of beauty treatments and massages. I can highly recommend the “Papaya-Body-Wrap” which includes a body wrapping with papaya fruit and an incredibly relaxing massage. And I think I don’t have to say anything about how the skin feels like after the body wrap . There is also a beautiful pool located in the heart of the hotel which was a nice alternative to the salty ocean. And it was mostly empty…just like the beach. The beach area was amazing with all the swinging beds (my favorite!), plenty of loungers, hammocks, and the finest and softest sand I have ever felt. A beach we all know from the most beautiful post cards.

WHERE TO EAT AND WHAT TO DO ON ISLA HOLBOX

Among the best spots to eat are thatched restaurant-bar Luuma, serving potent frozen margaritas and delicious tapas; seafront Mandarina does fine dining and cocktails; and green food truck owned by a French guy. I forgot the name, but you can´t miss that green spor when you find yourself in the “city centre”.

There are loads of activities on Isla Holbox. However, we wanted to relax as much as possible and that was the reason why we decided to do only two things: a whale shark tour and a bike-trip on the island. We rented cruiser bikes on a really hot, windy day (probably not the best idea) but still found it fun to ride around and get in a workout. Trust me, riding a cruiser bike on the sand isn´t easy, but such a great fun. Ando also a perfect way of to explore the island by burning some calories. And, the colourful bikes are simply perfect for pictures, don´t you think? The morning cruise along the stretched out beach of Holbox island accompanied by swimming with the whale sharks was amazing. It´s definitely a must-do. Our captain took us to a giant reef, where we snorkelled and swam with turtles, hundreds of fish, eels, barracuda, and lionfish.

Has anyone ever been to Isla Holbox? How did you like this piece of paradise?

*A very special thank you goes out to the Casa las Tortugas for welcoming me as a guest. The opinion expressed in this post is, as always, 100% my own! 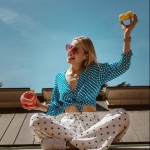